Sounds of Tamil, the writing system and dialect variations. Part I : The Vowels.

It is convenient to organise the description of the sounds used in Tamil in the traditional order that is used in the ancient descriptions of the writing system of the language. This is the approach that is usually followed in the recent descriptive grammars of Tamil, and indeed with Indian languages in general.

In contrast to the alphabetic writing systems used in Western scripts, the system used for writing Tamil (and many other Eastern languages) is a syllabary, ie each ‘letter’ represents a complete syllable rather than an individual ‘sound segment’. Even though it is a syllabary, it is based on an accurate phonetic identification of individual sounds and provides written  representation for all of the individual sound segments which are used in the language to convey contrastive word meaning (phonemes). This may seem to be a rather sweeping claim, particularly with regard to the ‘pulli’ letters which many would regard as ‘pure’  single consonants. I have argued elsewhere that the ‘pulli’ letters represent a special kind of syllable, a ‘dull’ syllable, in which the onset consonant of the syllable is sounded but the vowel nucleus may be silent (Please see this page).

The graphemes (letters) of Tamil can be grouped into three classes:

(2) Graphemes representing Syllables of consonant-vowel compounds (உயிர்மெய்யெழுத்து)i.e. CV, CVV or CV1V2). Graphemes in this category form by far the bulk of the ‘letters’ in the Tamil script.

(3) Graphemes representing Dull syllables apparently of a single consonant segment (மெய்யெழுத்து) where the inherent vowel  sound is cancelled by the ‘pulli’ diacritic mark in the form of a dot or small circle on top of the letter. Only the consonant sound may be pronounced. These graphemes are therefore often said to representing ‘pure’ consonants. [ Eg. Tholkaappiyam  chap 1, verse 15 : மெய்யின்  இயற்கை புள்ளியொடு  நிலயல் (The natural quality of the consonant is as when it stands with the pulli)].

Description and discussion of the ‘Pulli’ graphemes (class 3) is presented in separate post on Consonant sounds.

We will now look at the vowel sounds of Tamil in some detail, including their variations in actual speech in the main dialects of Tamil. Consonant sounds will be  dealt with in detail in a separate post.

Qualitatively, there is a five-way vowel contrast corresponding to the cardinal vowels          ɑ,  i ,  u,  e,  o. These are therefore the only segmental vowel sounds in Tamil which are phonemically significant. 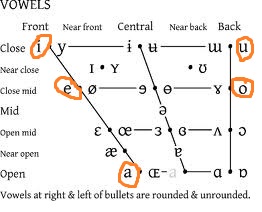 However, each of the vowels have a two-way quantitative contrast ie the short and the long forms of each vowel is phonemically significant. In addition, there are two diphthongs. This allows for twelve phonemic vowel formations. When the vowels occur word initially (i.e. in onset-less syllables) each of these twelve vowel formations is represented in the writing system by its own grapheme (Class 1 above).

The script never uses these vowel-only graphemes at word-medial or word-final positions.

Graphemes representing Consonant-vowel sequences, Class 2 above, represent syllables with consonant onsets and vowel nuclei i.e. CV, CVV or CV1V2). These account for the vast bulk of the graphemes in the script. They consist of a basic set and a larger derived set. The basic set consists of 18 graphemes for consonant-vowel (CV) syllables incorporating the default or ‘inherent’ vowel |ɑ|

The derived set is made up by combining the individual graphemes of the above set with linear diacritics specific for each of the eleven vowels (leaving out the | ɑ| or அ, which is inherent in the basic set). To illustrate:

and so on ……… The complete set of these graphemes is given in the Appendix at this web page.

This class of graphemes may appear at any position in the written word, though there are certain restrictions at the word initial and word final positions (see later posts on consonants).

Though Graphemes in this class represent combined consonant and vowel segments, the qualitative properties of the individual vowel segment and consonant segments represented within each grapheme remain distinct and unchanged. Tolka:piyam chap 1, verse 10 :   மெய்யோ  டியையினும்  உயிரியல்  திரியா  [Even when it joins with a consonant, the nature of the vowel itself does not change.]

There are only five qualitatively contrastive vowel sound contrasts in Tamil (i.e those which make a difference to the meaning of the words in which they are used i.e. phonemic. These are circled in red in the chart below.). But there are two other commonly heard vowel sounds which are noticeably distinct in quality from these five standard sounds but are not phonemic. These sounds are allophones of அ [ɑ]  and உ  [u] and are indicated in blue in the chart below: 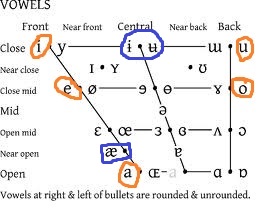 The open front vowel which comes before apical consonants such as /n, ன /,  /l, ல/, and /ɾ, ர/ in words such as அன்பு (ænbu),   அலரி  (ælæɾi)  அரம் (æɾam) are pronounced with a less open and more fronted sound /æ/,  as occurs for example in ‘anvil’. Though phonetically distinct, the two sounds /a/ and / æ/ carry the same significance in terms of word meaning in Tamil ( i.e. are allophones). The Tamil script does not distinguish between these two allophones. In fact most of the world’s languages do not distinguish between this allophonic pair in their writing systems. To my knowledge Sinhala is the unique exemption.

The other very common allophonic vowel in Tamil which is not reflected in the Tamil writing system is the close central unrounded vowel represented in the International Phonetic Alphabet (IPA) by the symbol /ɨ/.  This is the sound which is actually pronounced as the word-end  vowel in many words where the writing system implies an /உ/ sound. However, the close back rounded vowel /u/ is not the sound usually pronounced as a word-end vowel in common speech. You can listen to the sound /ɨ/ (and other IPA sounds) at their web page here. Consider carefully how the endings are actually sounded in words such as   கல்லு (/kallɨ/, stone),  பட்டு (/paʈʈɨ/ silk),  வீடு (viiʈɨ), பங்கு (/paɳɡɨ/ share), சிவப்பு (/civappɨ/, red) தடு(/̯taʈɨ, block, verb) அடுப்பு (aʈɨppɨ). In the last example, the penultimate vowel as well as the word final vowel are both pronounced /ɨ/, and not /u/as one would expect from the spelling.

In the colloquial spoken dialects of Tamil in South India (ST), there is a strong tendency for the lowering of the high short vowels /i/ and /u/ in word initial positions. See examples(5) and (9) below. This does not occur in Jaffna Tamil (JT) or in classical (literary) Tamil (LT). This vowel lowering in the word initial position does not occur with  low or mid vowels (examples 1, 2 and 12), or with long vowels (examples 3, 4, 7, 8, 10 and 13) or with diphthongs (example 11).  Note, also in ST only, the tendency for the insertion of a word initial onset glide before mid vowels (/y/ before /e/ as in example 12 and 13). Example (13) shows that this word initial glide insertion also occurs before long mid-vowels (/y/ before /e:/).

Interestingly, example (6) shows that the tendency for word initial vowel lowering is overridden by vowel harmonisation of the initial vowel with the same vowel in the succeeding syllable.

1 Response to Sounds of Tamil, the writing system and dialect variations. Part I : The Vowels.